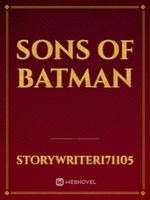 Richard Al Guhl ran away from the League of Shadows at the age of 13, leaving behind his three year old brother, Damian and his inheritance, the League of Shadows itself. He ran away to Gotham and, not knowing his father's identity, ended up living on the streets, working as a hero at night. That is, until he meets Batman and becomes the ward of Bruce Wayne.
Seven years later, he comes unknowingly across his younger brother, who gives him some shocking information; the identity of his father.

I do not own any characters. only the plot! all images used I got off Google and are not mine! I may have edited them though