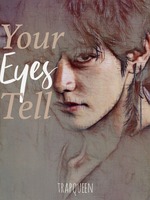 Your Eyes Tell YET

Madi Alanis, a young registered nurse, ventured her way to the United States to seek for greener pasteur for herself, as she decided to live on her own in the new chapter of her life.

Cahill Everson, a member of a boyband, who's having a series of concert in the US, his normal way of living since he debuted when he was 17 years old, was hoping to have another good time in the west together with his 6 members, before he finally makes up his mind to move on with his life.

Their paths collided, as one night, while they both decided to stroll to an album store in the outskirts of Chicago, a group of men pronounced a holdup and eventually held them two as hostages, together with a 6 year old girl.

It is indeed an unfortunate night. Will they manage to escape and save themselves from the gangsters?

Your Eyes Tell
All rights reserved, 2020.