/ Fantasy / The Chronicles of New Havens 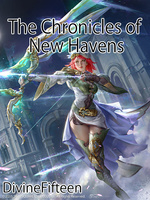 The Chronicles of New Havens CoNH

New Havens, a solitary island in the sky, isolated from the outside world, was celebrating their 514th anniversary. Elizabeth Silvera, a sixteen-year-old farmer girl, was longing for adventure, to explore the outside world when fate had a different idea for her. A mere instant was all it took for a sea of flame to engulf this tiny precarious town and destroy her life. Forced to abandon her home, Elizabeth descends into the world below to discover her fate!

The world is cruel. The world is unreasonable. The world is never fair. People die. Plans fail. Civilizations collapse. Worlds end. However, that does not have to be it all. No one starts almighty, strong and all-knowing!

Chapter updates are either daily or once every two days.