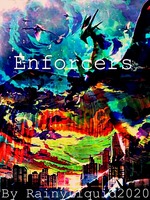 Enforcers tells the story of several kids who join a group known as the Enforcers who are responsible for protecting the Country of Red, from Criminal Activities and creatures known as the Bestia Macht.

In a frozen and dead world filled with massive monsters, vast wastelands, and a group called the Organization, humanity chose to hide away behind walls, slowly de-evolving, from a weakened Equation Of Life, humanity built up a blissful ignorance pretending the world around them isn't breaking, and chose to fight the serious situation with Comedy, and give all their problems to a single group.

Only a single group is allowed outside of major cities.

A group known as the Enforcers who use supernatural powers, advance tech, magic, and old fashioned determination, to fight back against the horde of Bestia Macht. They do everything, from inspire hope to their Nation, fight other Nations, slay monsters, capture criminals, rebuild cities, discover new areas to build cities, and they explore this dead world.

Only they are truly allowed outside the walls, allowing only them to see how broken their world has become. Can a group that has been given every problem, even have a hope to save this world?

They use a power called Attributes which is what they call their Superpowers, strange abilities that every man, woman, and child have.

The story follows a young boy named Hero Otoko, a boy sharing the last name with a man named Okami Otoko, the previous Squad One Capitan, the highest position an Enforcer can reach.

The story takes place in the Country of Red, a land filled with massive monsters, cold weather, and water hotter then Lava. The sky is black, and the only safe part of the Nation are the cities that man hides behind.

In the Country of Red several experimental weapons exist, but the most common one is known as Project Seraphin. A way to turn a human into the next stage of evolution giving them the power of Monsterfication, as well as two other Attributes. These people struggle on the edge of being Human, and Monster they struggle with using the Renacido, a power that will literally remake their body into a new form.

Follow this story as they are forced to figure out who they are fighting, what made the Bestia Macht, and what it means to have the spark, and most obviously what an Enforcer really is? What does it mean to have that Spark?

Along the way, discover something called the Equation Of Life, also known as Mantra, which is a strange system of power that seems to have several effects some of which are known, and some unknown. A weird system that can seemingly build the world around it and allow for pure evolution, that seems to have no limits. Watch as Hero uses this system to its max, teaming up with the world itself to save his frozen homeland and the girl, he met when he was a kid.

Follow along as they join the Enforcers, learn how to use their Attributes, Master The Equation Of Life, and most importantly. Complete their goals, dreams, and destiny...

Watch as this destroyed world is seemingly reborn as they cling onto any sort of hope, choosing to not ignore the problems, but to instead embrace them head on, and attempt to over come them. That's what it means to be an Enforcer.

"My name is Hero Otoko! And I am a Seraphin, and the Grandson of Okami Otoko. I'll use these powers I was given to protect my friends, and family... I won't lose to you. If I can't win I'll just have to become someone who can. No matter what I'll save her and I'll do it all while holding onto my humanity! I won't become the Monster you claim I am."

A Homage to Shonen Anime, Enforcers is an anime-like story full of jokes, romance, action, and a built-up twist, that might not have a good payoff but will certainly be filled with fun gags, and plots, along the way. Inspired from several anime, seen through a dark and destroyed world, can they hold onto their hope?