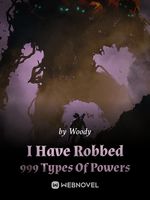 I Have Robbed 999 Types Of Powers

Video Games -- chs / day This is the average realized release rate over the past 30 days. The translator’s schedule is -- chs / day. 40 Chapters 344.3K Views

"Rob (Rank ???): Able to rob another person’s ability.
Yang Xi felt hopeless as the world seemed to want him to shine.
At first, he was a nobody trying to save his sister, but he became the one who had to shoulder the future of mankind.
Then, he created an organization just so he could hide his identity, but it became a force that had stretched its claw to every corner of the world.
And, when he gave one of his subordinates the power of [Training], that subordinate managed to evolve it into the strongest Divine Body…"