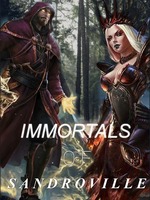 "When I was a little lad, I asked my father, " O papa, what makes a man powerful?". The old man stared at me with his wrinkled up face, sipping his wine and spoke, "Man may say he has power, might or wealth. These are what us, human think we acquire that make some few men think they are free and untouchable but don't be fooled, my son because power owns us.
We all are slaves to power, even to those high men you call powerful but they are not because they are also slaves to power, a bleeding being subjected to life, greed and pain and till the end of time, we will never change...

These words meant nothing to me until the day I turned into what I ignored the most - A slave to power.


From Human turned a vampire into an endangered Akmoonatural, Edward Carnon seeks for the One whom might discover the truth of his existence. Uncertain of his options and unresting questions, He embarks on a mission with four instruments of Darmich : Chimeandel The Great, Jark Andre, Aragon and Naltina to bring together all living souls of Darmich to prepare them for the coming storm but as the north cloud thickens, little did they know that a mystical hired killer on the hunt for their souls.

Will the universe be redeemed or be devastated into the darkness?