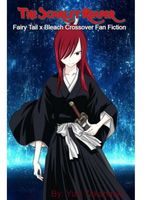 Erza Scarlet, An S-Class mage of Fairy Tail who hold a seat at the Ten Wizard Saints and the Fairy Tail 7th Guild Master finally had ended her journey by offering her life to save her friends and those who she loves the most.

Later that she learned that it isn't the end but yet a beginning of something new. The former who have lived her life as the queen of the fairies will now reign on the afterlife.

Her journey begins here to become a shinigami and the queen of the dead- the scarlet reaper.

I don't own the characters and anime just the story and the plot. It's just another Fan-fiction.