When The Carnations Bloom - Contemporary Romance

/ Contemporary Romance / When The Carnations Bloom 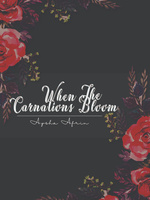 When The Carnations Bloom WTCB

"I may have got the wrong inference or even right, but I intend to keep showing you what is in my heart," he said taking her hand and placing it on his chest, leaning his head on hers, his eyes closed. "You know I have waited years to let this feeling out, to stand confident in front of you, for this moment," and he took a deep breath and gently touched her lips with his, kissing her. He puts his one arm around her, pressing her, and the other on the table to support her. She then put her hands around his neck, holding on tight, responding, as the water droplets kept falling from her hair. She knew nothing else and let it happen, for the moment, except the fact it's against the rules to do things with her professor.
.
.


When Miranda moved to the city from the beautiful orchard in the village, all she dreamt about was finding a nice guy who would cherish her, hoping for a different life unlike her family. But instead of one, she encounters two and finds herself in unexpected turn of events that changes her life. The sweetest moments turns into nightmares as she juggles between work and college life. The bitter past and the tempting present confuses her. Will she decide to battle it out or run away? Meanwhile the badboy Niall, the professor tries his best to work things out and put the things on track while his ex girlfriend keeps interrupting their lives.
What will happen between a handsome professor, a farm girl, a CEO and an obsessed ex-girlfriend? Will love overcome the horrors and responsibilities or bring them to doom? Let's read and find out.

# Slice of a life