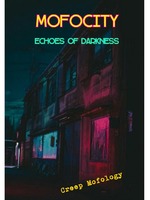 What is Mofocity? Is it a town? Is it a city? Does it matter? As far as the people were concerned, it's a goddamn country.

After that shit blew up, it pretty much ended the world for the town ... the city ... and that's all they ever knew afterwards. The ones who survived, anyways.

There is no place other than this, a peculiar little town with it's myths and mysteries, so odd even the moon refused to shine.

But people are still there, living and breathing, each of them with their own story to tell.

Here we follow the footsteps of Adrian Addams, an orphan, a loner, a night crawler to the core who works for Jordan Cromwell, the city's most influential man's son.

The city is going through some changes after 33 years of the separation, and Adrian is caught right in the middle of it. He's accustomed to the way of living where something strange is always happening, but something more sinister is going on.

With the appearance of Jordan's little sister, and a Chief of Police that's always on his tail, he will soon find out.