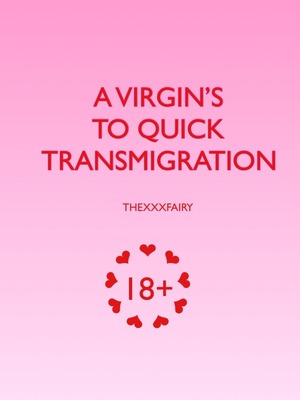 A Virgin's Guide To Quick Transmigration

Lee, a lower level employee at her company is called into her superior, Boss Lim's office one day to find out she was promoted. She was reassigned from working behand the desk to being a transmigrator who hopping through worlds and completed missions using her body! She was an old virgin, so of course she denied his request.
Lee: "No, I'm fine behind the desk."
Boss Lim: "Ah, Xiao Lee you were always funny. This isn't an offer, but an order."
Lee: "B-But boss I'm old. I don't have a nice face or a body, ah."
Boss Lim: "I believe in you, besides, if you try quitting, I'll make it so you can't find work, even if you go back that wasteland you called Earth."
Lee:"?!"
And so, she's promoted to the position of a transmigrator, one who's duty to fulfill quests and gather the 'essence' from the Male Leads within worlds.
She has to f*ck and collect c*m while guiding the son of fate in each world.
Lee: ...
A while later--
World One with a puppy-like popular actor: Jie-Jie, you can never leave me. If you try to, I'll lock you up and f*ck you for hours.
World Two with a scum, beastly king: Let's try for another child.
World Three with a beautiful noble young master: Stable Girl, open your legs wider.
Lee after being pressed down for the tenth time: (╯°益°)╯彡┻━┻