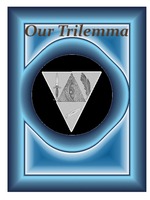 Ahmed currently works at the Carl Sagan Radio Observatory as a graduate student, but he used to work for his family, casually spying on his relatives and manipulating them using implausibly well-planned "scenarios." His family is gigantic—old money—with bizarre traditions meant to encourage competence in clandestine affairs as well as being insanely resourceful.

One of his favorite hobbies is "people watching," which gives him the chance to use his skills and surplus equipment for fun. Normal people watching involves sitting someplace public and watching people as they walk by. Ahmed, on the other hand, hides high-tech cameras and covert listening devices in public places, thus allowing him to do this remotely, which is pretty much the same thing, right?

His methods, despite being strange and mildly invasive, ultimately adds a degree of efficiency and convenience to his seemingly mundane hobby.

Shinjiro and Kit are best friends and students at Zephyrus University. Kit is straight and has a girlfriend, while the openly-gay Shinjiro has a crush on him. It's a secret that Shinjiro has kept for a long time because to reveal it would be worse than pointless.

Crushing on your straight best friend rarely ends well, but based on his observations, Ahmed thinks that Kit might not be as straight as he thinks he is. Shinjiro and Kit do not know Ahmed, but he knows them! For Ahmed, this is the perfect chance to meddle in the private matters of others for both fun and profit!

After some preparation and careful planning, Ahmed approaches a despondent Shinjiro with an offer to help him resolve his situation, once and for all. In return, Ahmed will get to experiment on the both of them while unobtrusively recording and documenting everything for the purposes of writing a book. At least, that's what he tells Shinjiro.
It is plainly evident to all those involved that Ahmed has additional ulterior motives. However, he has so many ulterior motives that isn't clear if he actually has any motives that aren't ulterior.