/ Fantasy / Secret Of The Elites 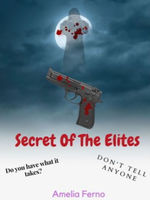 Secret Of The Elites

Matthew was an ordinary seventeen year old boy who lived a normal life until he decided to enroll in Golden Rose University, a prestigious school where all of his family members attended. It was his turn.

Suffering from a report on the first day of school, he went to the library to gather some information. He couldn't resist feeling drowsy, and having lost the battle, he fell asleep.

He woke up late at night to see no one even bothered to wake him up. Originally, his plan was to go back to the dorms undetected, but it didn't go through as he saw the elites walking towards the school gates. Curiosity won over him. So, he followed.

That night was an unfortunate one. A ventifio, a creature of unexplanable anatomy, locked on Matthew as a target. What happened next was life-changing for the seventeen year old boy.

Drama is unfolding as lies start to backfire, secrets that one has hid deep inside are slowly rising up to the surface. As curiosity killed the cat, can it also end friendships and unravel those very same secrets?

Note: Some of the places in the book are not real. They're just what my imagination created. Also, I'll be adding a few words on an already published chapter, so don't be surprised if, when you go back to the beginning, the wordings are different.