The Birth of a Villainess by Poisonlily full book limited free

/ Historical Romance / The Birth of a Villainess 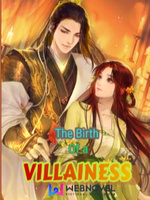 The Birth of a Villainess TBV

After her cruel death, Xiaofei finds herself alive again inside the body of a beautiful young lady from the noble Lin family owning the same name as her.

She was blessed with a peerless face, worthy of winning every men's heart and gaining women's envy in her previous life.

But she foolishly fell in love with the prince, destined to die a painful death at the hands of her own beloved people.

In this new life and body, evil schemes and scandals won't let her escape even after her rebirth hence,
she starts to do the same and shall be evil and ruthless to those who went against her.

Men and women needs to be bought.

Golden Throne has to be passed over.

Empire must be conquered and torched down.

And hearts needs to be snatched.

Xiaofei swears to overturn the world and slay her enemy. With a cruel era like this, one can only forcibly try to make a shell and protect oneself from harm.

Xiaofei must guard her heart.

However, who would have thought that a man full of viciousness an arrogance that could pierce the sky would suddenly barge into Xiaofei's life? And would shamelessly whisper next to her ear, "My wife's enemy is my enemy and my wife's wish is also my wish. However, I also have another wish that only my wife could grant for me."

"That is to have my wife for breakfast, lunch, snack, and dinner."

Disclaimer: The character(s) on the cover is NOT MINE and all credits will be given to the Owner/Artist. (I only edited the picture)